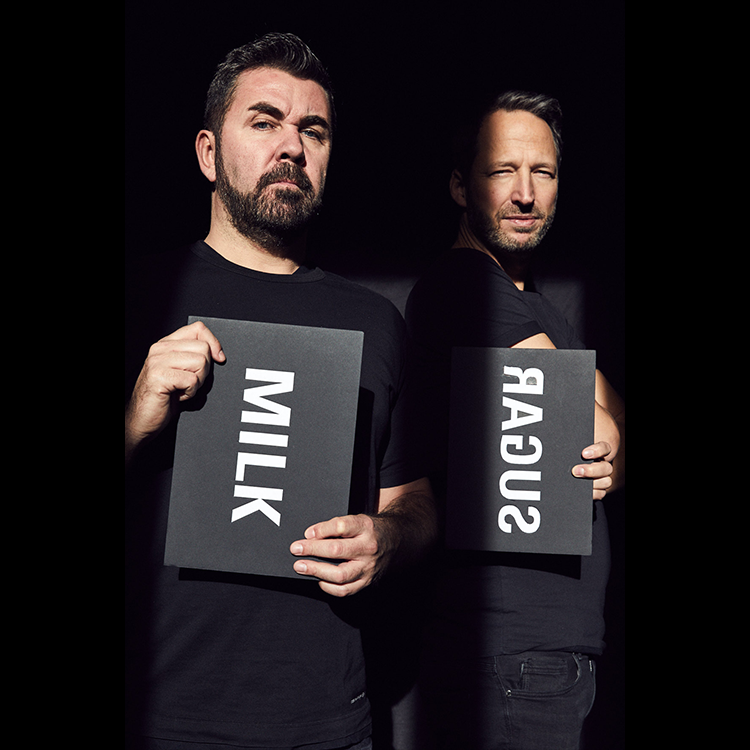 For more than two decades, MILK & SUGAR have been one of the most influential and successful DJ / producer personalities in Germany. Mike K. and Steven Harding helped shape the electronic music landscape early on, and they still do today. The people of Munich never tired of further developing their independent interpretation of house music and thus driving the scene forward. The result is an impressive back catalog with countless club and chart hits.

Decisive for their early international breakthrough was MILK & SUGAR's personal attachment to the US Garage House of the 1990s. Role models such as the house greats David Morales, Tony Humphries, Frankie Knuckles and Dennis Ferrer became important supporters who - like numerous other well-known DJs from all over the world - play the tracks of Milk & Sugar and carry them around the world. Their pieces have long been an integral part of the playlists of the most exciting clubs and events where MILK & SUGAR are regularly guests themselves. The absolute highlights of their career include gigs in legendary superclubs such as Space, Pacha and Amnesia in Ibiza, Sirena and Green Valley in Brazil or at national festivals such as Mayday, Time Warp, Nature One as well as the sun, moon and stars.

MILK & SUGAR have been creating tracks of particular intensity since the 1990s. This is how hits like "Let The Sun Shine" came about, an adaptation of the 1969 classic by 5th Dimension, which became a musical milestone for the duo. First the number infiltrated Ibiza, then they made it to number 1 on the US billboard dance charts and in the top 20 of the UK pop charts. The single "Higher & Higher" is an evergreen in electronic music history. "Hey (Nah Neh Nah)" received five gold awards and reached the top 10 in ten countries. "Canto Del Pilón", "Stay Around" and "My Lovin (featuring Barbara Tucker)" were able to conquer the charts in various countries and are still represented in the sets of many DJs. As DJs, producers and label operators, MILK & SUGAR have already received numerous important awards, including a German and an Italian DJ award and the German Dance Award for best independent label. Their compilations “House Nation” and the “Sessions” series - which range from “Beach Sessions” to “Miami Sessions” to “Summer and Winter Sessions” - also have a large following, and all editions always reach the top Various iTunes charts.

Again and again, MILK & SUGAR work with hip talents from the electronic music scene. The results of these collaborations are internationally recognized. Remixes were created for artists such as Jamiroquai, Janet Jackson and AcidHouse legend and scratch world champion Simon Harris. Most recently, Mike K. and Steven Harding worked with David Penn, Full Intention and Eddie Amador on new tracks for the current year. One of her biggest and most innovative projects is “Ibiza Symphonica”. Unforgettable club hits have been rearranged, recorded by the Munich Symphony Orchestra, and produced by Euphonica. In this way, thanks to MILK & SUGAR, an euphoric journey through the acoustic history of Isla Blanca was created in an orchestral sound.

In the constantly changing world of the music business, MILK & SUGAR have been able to help shape a particularly fast-moving scene for more than 20 years. Their name will forever be associated with the history of house music - and Mike K. and Steven Harding are more than ready for many more exciting projects.